Random Crap No One Cares About

The kind of toe stubbing that hurt so fucking bad it made me contemplate life.  It occurred to me as I sat there trying not to curse too many times in front of my child and holding the injured baby toe that I may have trouble walking later.  It occurred to me that no doctor would give a shit and that it would probably be super inconvenient.

It also occurred to me that although I have endured two natural and pain intervention free childbirths that stubbing your toe is oddly on the same level of pain.  For reals.

If you were ever wondering what it feels like to be in labour, imagine stubbing your vagina, similar to how you would stub your toe.  Then stub it again and again at increasingly frequent intervals until you’re doing it every 60 seconds or so.  For 30 hours. It would be pretty comparable.  That’s how much stubbing your toe can fucking hurt.

2. The Buddy-Baby just tossed himself down the stairs.  It was bound to happen, if genetics have anything to do with it.  I’m actually surprised it took him this long, seeing as his sister used to do it on a weekly basis at this age.

Not to fear, we are well stocked with teeth rotting but heart warming candy and popsicles, thanks to the plague we suffered earlier this month.  There was no blood and no obvious bruises or bumps, so I will stay optimistically hopefully this tragedy is now over.

3. We are under a boil water advisory in the city.  In my not-so-professional opinion, we can thank some city water sampler for fucking up and contaminating his sample therefore causing ridiculous people undue amounts of stress.  Bottled water is sold out everywhere.  It’s not like the water has turned into neon green slime.  It had slightly higher than allowed bacteria counts which is killed by boiling.  I took a bath today and let the water touch my mouth.  I have yet to grow any extra limbs or start vomiting uncontrollably, so you’re all probably fine.

4.  The pug’s mammary-testicle continues to grow.  Many of my students are asking if she is in fact a boy and why did I give him a girl name like Gracekelly?

It’s actually a breasticle.  A breast that looks like a testicle, because from behind she does look like she has nuts. We haven’t cut it off because the dog has a habit of dying on the operating table.  Any advice here wold be greatly appreciated.  Is there a Breasticle Anonymous  support group for pet owners?

Other than that, It’s All Quiet on The Wednesday Front. 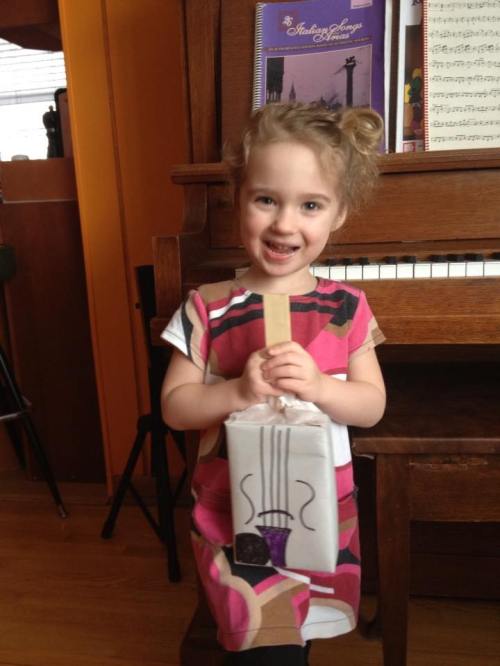 This past weekend was one of those moments in my life where I took a mental photograph and stored it in my happy place.  I also took a real photograph, because I don’t want to lose that moment as I age and my memory starts to go.

On Sunday my Twee Destroyer had her first violin lesson with one of my dear friends and teaching colleagues.  The cuteness factor was pretty high on the Richter Scale.  She happily toted her box violin and dutifully performed each task as well as any three year old can.  I was actually just amazed that she was able to concentrate enough to follow any instructions, despite having taught students this young myself.

But the lesson wasn’t really the point for me.

You can’t imagine what it’s like to watch your daughter find joy in the thing that has brought you joy your entire life. To embrace something that is so important to you and be excited to embark on her own voyage. To have something in common with her for (hopefully) years to come.  I can only wish that a love of music will be something that connects us even when we don’t see eye to eye.  And I can only wish that this part of me will always be a part of her, even one day when I’m gone.

That 20 minute lesson gave me a preview of what it will be like to watch her learn and grow and achieve, and it made me feel so excited to watch her become a person over the next few years.  And it made me a little sad to know that she is leaving her babyhood behind and starting to grow up way to fast before my very eyes.

But in the meantime, I’ll sit back and hold close to my heart this moment where I saw myself in her for one of the first times.

Ok.  I can walk, but it’s not the easy, muscle-memory activity it was just two days ago.

The positive thing about this ambitious exercise challenge is that a whole bunch of my people are on board.  There must be at least 10 friends who have promised to do it too.  It’s kind of a fun thing, suffering as a group as opposed to suffering alone.  Something rather communal about it.

Also on the positive, my ass doesn’t hurt.  Which means that my ass is obviously is extraordinarily great shape compared to my fucking legs.  How one’s ass muscles get so amazingly strong is beyond me, but I’ll take whatever I can get today.

So here’s the bad part:

Stairs are also posing a bit of a problem, and I am currently cursing the idea that we live in a house with three floors.

My vagina seems to hurt to.  Can doing 105 squats in 24 hours injure your vagina?  Please see earlier statement about horse fucking.

However, I did complete the necessary amount of squats this morning to say I am still on the wagon.  Maybe they weren’t as deep as yesterday, but they still happened.  They count.  I know because of the pain.

So, this chick I know at mylifeisthebestlife  decided that she’s gonna do Insanity and be all fit and crap.  Unfortunately for me, this girl serves as one of my primary sources of inspiration for life, so I thought, maybe I should challenge myself to something other than bitching and moaning for once.

So, I was referred to this:

And I was stupid enough to broadcast my intentions on Facebook.

I suppose I needed a way to hold myself accountable for it.  If I say I’m gonna do something, then I guess I’m committed.  I also needed something very simple.  All I have to do here is count. And squat.

For a very long time.

In the end, I hate a contest I can’t win.  And in this contest all I have to do to win is to participate.  And an automatic win? Those are odds I like.

After I hit 50, I felt all wobbly.  Maybe I should have waited for a day I don’t need to walk afterwards to start?

It’s only going to get easier, right?

Hahahahahaha.  This is gonna be all kinds of bullshit, isn’t it?

The New Year Can Suck It Too 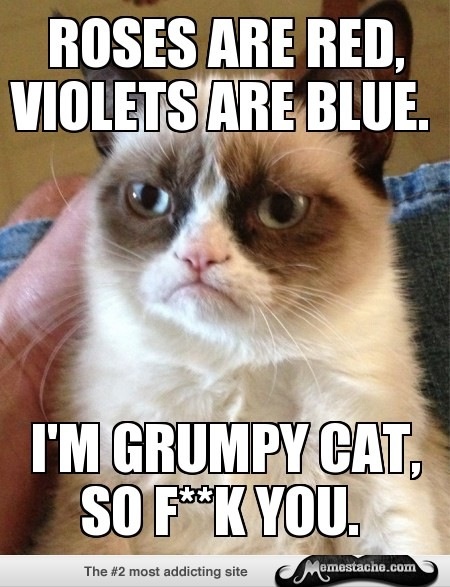 It’s funny how much work the Christmas season is, and how quickly it ends.  Call me a scrooge, but not fast enough.

There’s a reason everyone says that Christmas is for the kids.  Because that’s the only time it’s fun.  Between the planning, the shopping, the gathering the pre-cleaning, the post-cleaning, the cooking, the eating, the tree, and trying to stay sober enough to not burn the fucking turkey, I have never been so happy to see January.

I have a terrific New Year’s Resolution.  It’s to simplify my life.  Too many things, too many commitments.  I am grumpy and tired.

Did I mention my entire has the clan has the flu right now except me?  Don’t get me wrong.  I am thankful not to be sick (yet) but I haven’t slept in almost a week and Husband is about to work a week of nights. Which means you can bet your ass I will fall ill sometime in the next few days so that I can slowly die of exhaustion.

After Christmas I experienced sudden and terrifying deafness apparently caused by fluid in my ears.  It has been slowly resolving but O.M.G.  I’m a musician.  I sorta need my ears to work.

And I sprained my ankle on New Years Eve.  Walking.

You know what?  I think the new year blows too.  Maybe I should just sleep until Groundhog Day and hope for a better existence?