The One Who Changed Everything

4 years ago, everything changed.

After July 18 at 11:39 pm, everything I thought I knew about love tossed itself out the window.  That doesn’t mean that love didn’t exist before, but it took on a new meaning.  It changed forever.

When someone places your child in your arms for the first time, you finally know what it means to love something enough to be willing to die for it.  You finally know what it feels like to be selfless.  And that, to me, is what true love is.  Loving  someone so much that your needs always come second, and there is no sacrifice you wouldn’t make for them.

And that’s what happened to me 4 years ago today.  This little girl who now has long curly blond hair and giant grey-green eyes. Who loves birds and dogs and lizards.  She loves to go to the library and does gymnastics and remembers the words to every nursery rhyme and silly song every sung to her.  Her favourite superhero is Spiderman and she loves to watch documentaries about dinosaurs.

She does and says the most ridiculous things and I wouldn’t change anything about her for the world.  She steals the heart of everyone she meets with her empathetic heart and sweet smile.

I am so  lucky to have been chosen to be your mom.  You changed me.  You changed everything.  You’ll probably change the world someday.

I love you so so much.  I don’t think you’ll ever know.

Happy Birthday to my Twee Destroyer.  Please stop growing up so fast.

The Dick In The Big White Truck

So yesterday I was driving home and I see this big white pickup truck in front of me with huge decal letters in its rear window.  I wish I would have taken a picture, but having your phone out while driving will cost you your first born and a couple bags of gold in this country.

Anyway, the message said something along the lines of ” If you can read English, say thank you to a Veteran for ensuring your freedom.  And if you can’t or won’t, then go back to your own country.”

What the ever living fuck?  I mean, it’s not like someone updated their Facebook status to say something ignorant.  This fucking prick actually went out and spent all this money to make sure every person who passed him on the road knows what kind of racist he is.

Ok.  So clearly he’s a veteran.  And to that I say:  “Thank you.  Thank you so much so voluntarily risking your life to ensure the bad guys don’t win and I can enjoy not wearing  a cloth over my face or be subjected to some evil dictator.  Thank you for ensuring that the liberties I enjoy remain in place. ”

And then I look up and thank God I am white, and was born in this country.

I just kept thinking how this guy clearly didn’t understand what he was fighting for. Aren’t we a country that tries to help others?  That brings people in need here?   Canada is built on it’s multiculturalism.

And just because someone holds on to their own cultural identity and traditions, doesn’t mean they aren’t embracing and appreciating what their new adopted country is offering them.  I mean, if I moved to North Korea for example, I would still want to celebrate Christmas and eat maple syrup and all that jazzy Canadian shit. But I’d still try Kimchi and immerse myself in Korean traditions. The difference is that sick fuck in charge would probably have my head chopped off for being different.  I like to think that Canada is little better than that.

I find it really hard to believe that a veteran who has seen some of the horrible places and conditions in this world would think that people shouldn’t have an opportunity to have a better life.  He fought for that.   But if a refugee comes here and doesn’t speak enough English they can jut go back to where they come from? I would like to see how quickly he would learn Arabic. Or Chinese.

C’mon dude.  You should be so completely ashamed of yourself. 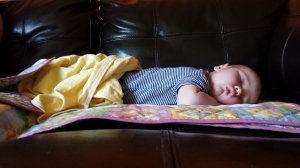 Seriously one of my favourite baby photos of Buddy ever.

On this day, two years ago I met my true love.

We’d been corresponding for 9 months or so through a series of one sided conversations where he initially didn’t respond at all.  As we got to know each other better, he would move in response and let me know he heard me through a bunch a body movements or hiccups.

He like sweet things a lot so we went to Dairy Queen often.  You know what they say about love making you fat?  I must have loved him way more than you normally could love someone so early in a relationship.

I’d seen his pictures and thought he was very handsome, but they didn’t really do him justice.

So when I met him, at 1:35 am on July 3, I was overwhelmed with how beautiful he was and felt like my heart might just explode.  I loved him that much.  In an instant.  Forever.

Now, two years later, he still loves me.  With all the grace and gentleness of a water buffalo, but I don’t care.  He doesn’t just kiss me, he wraps his arms around me so tight and squishes what feels like his entire essence into me.  He breaks everything in my house.  He twirls and pulls my hair at night, waking me up repeatedly, but I don’t care.

He tries my patience and throws tantrums and drives me up the fucking wall, but I don’t care about that either.

Because honestly, I can’t imagine ever loving anyone so hard and so much as I love him.

And now, two years later, after sweeping in and grabbing a hold of my heart so hard I see glimpses of what kind of child and man he will become.  A little boy who is full of so much joy, who loves to sing and run and play with everything that’s not a toy.  Who loves music and the Muppets and dinosaurs.

Happy Birthday to my Buddy.  Watching you grow up so fast has my heart in a knot, and I love you more than life itself.