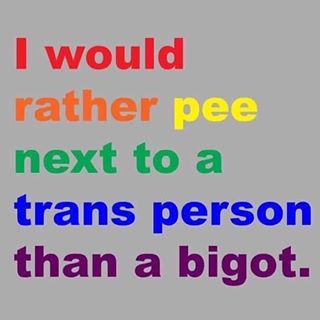 In the apparent third installment of what is turning out to be my “Don’t Be An Asshole” series, let’s talk about this transgender bathroom law in North Carolina.

Let me start by asking this:

Is this actually what all people in suits and fancy shoes spend their days thinking about and working on?  They worry about who is using what bathroom?

They’ve got mass shootings happening at an alarming rate in their country.  Addiction and poverty, with the gap between the rich and the poor only getting wider.  Some crazy ass people half a world away who want to kill us all every day, and our lawmakers are busying themselves trying to prevent somebody from using the can?

How about you make a law that says if you are a terrorist with a bomb you can’t use ANY bathroom in the States?  That would be useful.  I mean, if you gotta go you gotta go.  And not giving bad people bathroom rights is one way to keep asshole killers out of your country, right?

Look. Transgenderism (is that a word?  I’m so sorry if it isn’t.  Please educate me.) is something that can be difficult to wrap your head around.  We as a society have been taught and simply accept that whatever genitalia is on the outside determines who we are on the inside.  That’s the truth that I have always known as well, but I also am willing and determined to understand and accept a new one.

Although I highly recommend only pooping at home, because who wants to smell up a bathroom and have everybody know that they pooped there?  (This is my own personal hang up and actually a whole other post.)

Anyway.  I’m just wondering about these fucking politicians who made the law in the first place.  In their giant mansions with 17 bathrooms, do they have designated boy and girl bathrooms?  Are moms allowed to take their children into the same bathroom as them? Do they have a Bathroom Constable who monitors the use of the toilets and make sure no one is getting assaulted?

I’ll tell you who cares about it.  People who are afraid.  People tend to get afraid of things they don’t understand or can’t identify with. And the idea of someone with a penis saying that they are a woman ( or the other way around) and wanting to have surgery to correct their anatomy is a very difficult thing  to understand.  And so people react by trying to put blame or shame on those who are different from them because they are trying to protect their truth.

It really has nothing to do with the trans community.  It has to do with fear and uncertainty and people who so arrogantly think they know what is best for everybody else.

If this law was really about protecting women, they would realize that the real folks in danger are most likely the trans women who would be forced to use a man’s restroom.  They are the ones who will be assaulted.  Not the cis women sharing a bathroom with a trans woman.

My biggest fear for the trans community is that this law will force more trans folk to hide who they are to their coworkers and friends.  I fear that they won’t feel comfortable to publicly identify as trans and I worry about the toll that takes on one’s mental health. Nobody should have to hide from themselves. Trans folk already have such a high risk of depression and suicide, and this law is such a giant step back.

Bitches, every single human being on this planet deserves to be treated with respect and dignity.It’s 2016.  Aren’t we past making laws that segregate people?  Should we get the trans community their own buses and water fountains?  COME ON ALREADY.

The bigotry that this law was founded on reeks of assholery and bullshit.

I think if anything we should make an anti asshole law.  Because THAT, Bitches, would be revolutionary and would actually change the goddamn world.

Don’t be as asshole. Let people use the fucking bathroom.